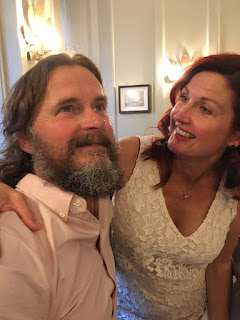 Summer is my favourite season of the year. This June was really busy as historically it is the most popular month to say “I do”.

Looking back on ceremonies I have performed this June brings a smile to my face at the memories of the day and how they have all been so different.

June started with R and M having an evening wedding, their shared children were included in the hand fasting ceremony by having their very own bracelets to keep. As part of the ceremony the bridesmaids read a poem about friendship and the two step-dads each gave their words of wisdom and thoughts about the strengths of the couple and the journey they had already travelled together.

A 30th wedding anniversary vow renewal for K and T was like stepping back in time to the 18th Century. The setting was West Stow Saxon village and everyone was dressed in either dresses like Jayne Eyre or in the smart uniform of the 95th Rifles. K gave his wife a fresh water pearl as they exchanged promises to one another. This was followed by a dove release and the 95th Rifles showed their support by firing a round. Thankfully no doves were injured in the production of the ceremony!

Then there were V and J’s celebrations at a farm in Suffolk. V and J are living in Costa Rica together, so wedding planning was completed through Skype and email proving distance doesn’t matter. They wanted to have a family wedding for V’s family in Suffolk. It was a relaxed happy occasion, in fact I don’t think I have ever met such a laid-back bride as she only slipped her dress on 30 minutes before the ceremony. The couple said their vows in Spanish, it was a beautiful moment and I do hope my pronunciations were practised enough!
K and A’s journey started when they met at 6th form. After 10 years of dating they decided to tie the knot in a family member’s back garden. The marquee had the most beautiful backdrop which was a colour explosion of handmade paper flowers all crafted by the bride, After the ceremony the guests were taken to the village hall by a vintage double decker bus.

June finished with Two Doctors making their promises to one another in the parent’s picturesque garden that happened to be set in the middle of a golf course. The bride wore the most amazing tight-fitting dress that really showed off her figure.

A big thank you to my husband who celebrated 20 years of marriage with me on the 13th June. Thanks for doing what you do and being an amazing husband and father.